How to choose the right headset for your virtual reality experience?

Virtual Reality (VR) experiences are more immersive than ever before with the rise in the quality of new headsets. However, choosing the right VR headset for your project requires considering more than just quality; There are many questions you need to ask yourself when it comes to choosing the right headset for the experiences you want to deliver. How much space you have set aside for the VR experience? Does the experience require interactivity? Are there portability issues when carrying them between conferences?

Random42’s production team have trialled and tested all the leading VR headsets through countless high-quality VR projects for our clients and our continued research into the latest VR technology. To help address some of these considerations, we have put together this guide to help you to find the best headset for your budget, space, and overall experience.

With these questions in mind, we take a look at how Random42’s in-house production team are harnessing the power of VR technology to produce some of the most impactful experiences in the medical animation industry.

The Oculus Rift launched in 2016 and like other headsets, the Rift has the ability to immerse the viewer into a video or game by producing two images simultaneously. It does this using position and rotation tracked controllers, which track the user’s hands in the VR space.

The performance potential of the Rift is dependent on the connected PC, but overall, the Rift can handle complex 3D scenes and high-end graphical effects – perfect for intricate 3D medical animation viewing. The Rift produces a crisp and immersive VR experience, with the bonus of built-in-audio headphones that help set this headset from competitors.

The Rift’s external trackers allow the controllers to be traced almost everywhere you place them – as long as they remain in the field of view of at least one camera. This means the ability to track movements behind your back or under objects is possible. There is also the potential to use higher-end controllers with the Rift which will allow position tracking of individual fingers. The adjustable and secure tri-strap head mount also adds to the comfortability of the smooth and captivating experience offered by the Rift, all at the cost of around $399*.

The Valve Index and HTC Vive fall under the same ‘class’ as the Oculus Rift: higher-end headsets that need a PC connected to the headset for it to run. The HTC Vive is very similar to the Oculus Rift using ‘room-scale’ tracking technology, allowing the user to move in 3D space and use motion-tracked controllers to interact with the environment. The technology and the price of the Oculus Rift and the HTC Vive are almost identical. The Valve Index, on the other hand, has a higher price tag of around $999*. This price reflects the slightly better optics and next-generation controllers which the Index possesses, allowing the user’s individual fingers to be tracked. The Oculus Quest is new to the market, launching in May 2019. This fresh piece of kit is standalone, meaning it does not need to be connected to a PC, unlike the older Oculus Rift. This wireless feature makes the headset a great choice for use at conferences and events.

The Quest also uses position and rotation tracked controllers, which track your hands in VR space and it has the optimal compromise between performance and accessibility, suited for both video playing and medium-scale real-time VR experiences with 3D elements.

The Quest has positional audio built-in, which produces sound from your virtual adventures without headphones. Another noteworthy aspect of the Quest is that it theoretically offers an unlimited tracking area due to the use of ‘inside-out tracking’- insight sensors on the headset itself. There is one sensor in each corner of the headset, and they scan the user’s surrounding environment, tracking their location and movements within it, as well as the motion of the controllers.

The convenience of the Quest represents something that VR has been striving for, as not being restrained by wires creates a more enjoyable experience due to quicker set-up times, within minutes, and no risk of tripping on wires. The Quest has an OLED display panel with 1440 x 1600 per eye resolution, which means the Quest offers more realistic on-screen images.

The minor downfall to the Quest is that as expected it is less powerful than the Rift because there is no PC powering this headset. However, at a price point of $399*, this well-designed, wireless piece of kit offers a realistic, comfortable, and straightforward virtual experience for users.

The Oculus Go is simpler than the headsets mentioned so far. It doesn’t allow interactivity such as moving around and grabbing things in the VR space, nor does its performance quality live up to the headsets previously mentioned. Instead, it provides a comfortable and affordable introduction to the world of VR.

Like the Oculus Quest, it is wireless so it is well suited to conferences. It is extremely portable with the hardware and processor inside the headset and the grip controller included in the box. This grip controller is not as sophisticated as the others – essentially acting as a laser point for selection and interaction rather than using your hands to interact with the experience – making the headset most suited to video playing and basic interactions such as menu questionnaires.

Priced at $199*, the Oculus Go is the cheapest of the headsets here. Yet, for a budget VR experience, it manages to offer a pretty good display for reading text or watching videos, built-in speakers allowing for ‘spatial audio’, and the foam padding around it makes it one of the most comfortable VR headsets. The benefits of these headsets only scratch the surface of what is possible with VR. To explore the full potential of what VR can do, please get in touch with our experienced team who would be happy to help create a tailored and unique experience around your product or disease area

*All prices included are the retail price for the headset only, which may be subject to change since the article was written and are not a reflection of Random42’s VR costing. For information on the medical virtual reality experiences we can offer, including cost, please get in touch with our team. 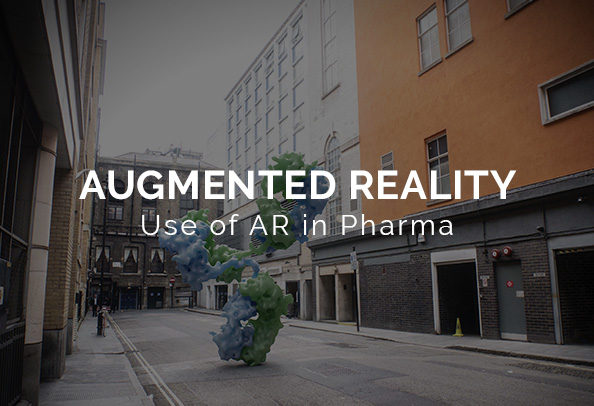 Exploring the Use of Augmented Reality in Pharma